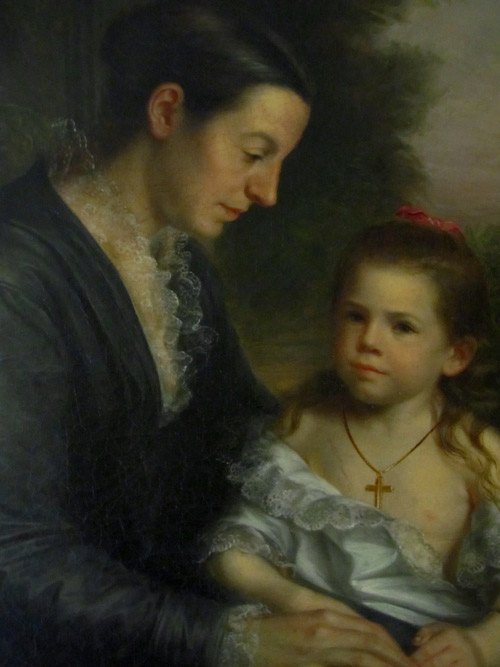 It started with an old painting, a long lost relative, and a little girl who once lived on the streets of New York.

When I was young, I used to sit and stare at a portrait that was hanging above our piano, a beautiful painting of a woman and a young girl. The woman, dressed in black taffeta, was seated in profile as she watched over the little girl who was at her knee. The child, looking as if she’d been allowed to play dress-up in her mother’s clothes, stared out of the painting with contentment, a loose fitting dressing gown the same shade of blue as the sky in the artist’s background draped around her, a large silver bracelet on her wrist. Her dark hair was held away from her face with a red ribbon, and I’d often beg my mother to fix my hair the same way. Every time I asked her to tell me about the two sitters in the portrait, she’d patiently explain, “The woman is your great-great-grandmother. I was named after her, and she was a lady doctor. The child is her daughter.”

My desire to learn more about “Dr. Sadie” followed me throughout my life. I begged all the information I could from my grandmother and other relatives, but family papers, journals and letters had been lost over the years, leaving me with little more than a few names and dates. In 2007, my mother passed away after a long battle with colorectal cancer.  In the months that followed, I decided that it was time to uncover Sadie’s past for myself. I went back to notes I had taken several years before and began to piece her life together, one clue at a time.

It was a journey filled with serendipitous twists and turns. An envelope given to me by a medical historian led me to a woman who held a personal archive of letters written to and received from a young female medical student who happened to be a contemporary of my great-great-grandmother’s. Second-hand books as well as books and ephemera from the shelves of the New-York Historical Society Museum & Library helped me to understand what the city was like in the late 1800s (The Nether Side of New York: Or, the Vice, Crime and Poverty of the Great Metropolis; Sunshine and Shadow in New York; Darkness and Daylight in New York: Or, Lights and Shadows of New York Life; a pictorial record of personal experiences by day and night in the great metropolis, a “gentleman’s directory,” and a catalogue of exhibits at an anatomical museum, to name but a few.) Another trip led me to Dr. Steven G. Friedman of the New York Downtown Hospital, which celebrated its 150th anniversary in 2007. In his office I held in my hand an official historical document naming my great-great-grandmother as one of the first graduates of The Women’s Medical College of the New York Infirmary for Indigent Women and Children. I realized then that I had stumbled on a tale much larger than the one I had first set out to uncover, a tale that needed to be told.

In 1870, over thirty thousand children lived on the streets of New York City and many more wandered in and out of cellars and tenements as their families struggled to scrape together enough income to put food on the table.

Under the mentorship of sister physicians Drs. Elizabeth and Emily Blackwell, Sadie and her classmates worked tirelessly to care for such children. They faced fierce opposition from the medical establishment as well as from society. Riots formed outside the doors of the infirmary, and funding was difficult to obtain. It was their mission to give health care to all women and children, no matter what their station or income might be. As the population of the city rose at an unprecedented rate, the ravages of disease were felt most keenly on the Lower East Side. Outbreaks of typhoid, diphtheria and small pox rose alongside the continuous spread of tuberculosis and sexually transmitted diseases such as gonorrhea and syphilis. As the “lady doctors” of the infirmary worked to increase awareness of the plight of the city’s poor, the young boys of the tenements were shoved out the door to find work, and little girls became a commodity.

Sold into prostitution at a young age, many girls from poor families were brokered by madams (or even their own parents) as “fresh maids.” Men paid the highest price for girls who had been “certified” as virgins.

At this same time in New York, syphilis was an overwhelming, widespread puzzle of a disease with no remedy and it was this taboo topic that my great-great-grandmother chose as the subject of her graduation thesis. In her day, there continued to be much argument over how the disease was spread and there were many unsuccessful (and often destructive) forms of treatment. An even greater tragedy than the human wreckage resulting from this disease was a deadly myth that preyed upon young girls. The myth of “the virgin cure”—the belief that a man with syphilis could “cleanse his blood” by deflowering a virgin—was without social borders and was acted out in every socioeconomic class in some form or another. In fact, the more money a man had, the easier it would have been for him to procure a young girl for this unthinkable act.

As one physician of the time stated, “I have been surprised at discovering the existence of this belief [the virgin cure] in people generally well informed as well as among the comparatively illiterate. I have tried to find evidence for the theory that it is a belief traceable to certain districts but I have discovered it among people of different places and of different occupations—so different that now I should scarcely be surprised to come across it anywhere.”

Originally I thought that the narrative voice of The Virgin Cure would be Sadie’s, but as I searched for the best way to write the story I wanted to tell, I discovered that it wasn’t to be found in her voice after all. I spent hours walking the streets and sidewalks that had once been travelled by my great-great-grandmother in her work as a medical student and physician in the late 1800s. As I walked, I tried to conjure up the memory of her life and the women and children she had served. On Second Avenue, I stared at the place where the New York Infirmary for Indigent Women and Children once stood. I went to Pear Tree Corner to see where Peter Stuyvesant’s great pear tree had lived for over two hundred years. I visited the Lower East Side Tenement Museum and looked into small, dark rooms of the past. In my steps, on those streets that day, I found my answer. I found the voice I’d been waiting for, the voice of a twelve-year-old street girl named Moth.