This is the first in a series of posts I’ll be devoting to the topic of witches and witchcraft. I’ve long been a fan of all things “witchy”-crystal balls, incantations, black cats, etc., and as a child, my favourite Halloween costume was “the classic witch.” So, it seems only natural that I’d eventually choose to write a novel inhabited by witches of my own making in all their strange, enchanting glory.

While writing The Witches of New York, I gathered heaps of historical accounts and odd tales alongside bits and bobs of practical magic. Not all of it made its way into the novel, so I thought I’d share some of it here during the months leading up to the book’s publication. No spoilers, I promise, just a weekly post infused with witchy goodness.

1. a woman thought to have evil magic powers. (one that is credited with usually malignant supernatural power; especially: a woman practicing witchcraft with the aid of a devil or familiar.)

3. a charming, alluring girl or woman.

4. a practitioner of Wicca

First known use: before 12th century.

What does the word witch mean to you?

When you hear the word witch, do you think of a woman wearing a pointy black hat and long black robe, flying through the sky on a broomstick? Is her face covered with wrinkles and warts, or does she have the perky-pretty face of Samantha from the 1960’s TV show, “Bewitched?”

I’ve always loved the moment in the movie The Wizard of Oz when Glinda the Good meets Dorothy for the first time. She floats across Munchkinland in her bubble of magic, then appears before the girl and asks, “Are you a good witch, or a bad witch?”

There’s no “Hi, hello, how are you?” or “I understand you might be a little freaked out right now,” but just a scarily sweet, give it to me straight, “Are you a good witch, or a bad witch?”

Glinda has it on good authority that Dorthy’s got some solid skills when it comes to piloting flying houses, so of course she assumes the girl’s a witch. I have to say that in that moment (even though Dorothy denies it) I, like Glinda, want to believe that even young farm girls from the Midwest can hold their own when it comes to magic. It was purely selfish speculation on my part, of course. I grew up in a land of corn fields and tornadoes. I spent lazy afternoons walking along dusty lanes singing songs about rainbows. If Dorothy Gale could be a witch (or at least mistaken for one) then maybe there was hope for me yet.

Are you a good witch or a bad witch?

Over on Pinterest, I’ve been keeping a board of Witches to serve as inspiration while I write. The pins hold a wide variety of images, to remind me that all witches are not alike. Check it out if you’re so inclined, and then follow me on Twitter for some #WitchyWednesday fun. I’ll be sending out tweets from @SideshowAmi – including links to quizzes that will help you determine, which witch you are. 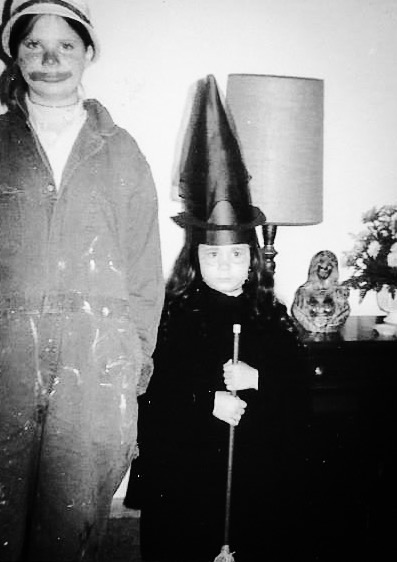