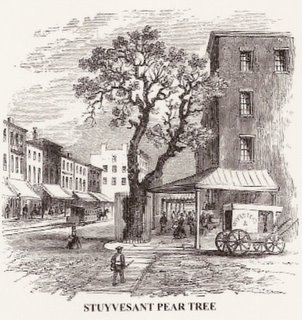 It was my father who gave me my name. Mama said it came to him at a place called Pear Tree Corner – “whispered by a tree so old it knew all the secrets of New York.” The apothecary who owned the storefront there told my father that he could ask the tree any question he liked and if he listened hard enough it would answer. My father believed him.  – from The Virgin Cure

Several readers of my novel, The Virgin Cure have recently asked, “Was there really a Pear Tree Corner?”

The answer is, YES.

Once upon a time, a writer of historical fiction (that’s me) was searching 19th century census records and business directories hoping to find evidence of an apothecary near the 1871 location of The New York Infirmary for Indigent Women and Children. Her search revealed a few possible choices, one of which was especially intriguing…

The Brunswick Apotheke, established by Louis Brunswick in 1851 was located at the corner of Third Avenue and Thirteenth Street, a place known to most New York City residents of the time as “Pear Tree Corner.”

This was because a pear tree had been planted there in the mid 1600’s by Gov. Peter Stuyvesant, long before anyone could have imagined the paved roads and buildings that would one day spring up around it. Stuyvesant brought the tree from The Netherlands as a way to make New Amsterdam and his bouwerij (farm) seem more like home. It’s said that he claimed that the tree would be his memorial, “by which my name will be remembered.”

In a sense, his words turned out to be true. The tree flourished in that spot for over two hundred years and was revered by many in the city (especially those of Dutch heritage) as a symbol of strength and abundance. Yearly celebrations took place around the tree – songs were sung, and ribbons were tied to its branches.

In 1867, a fierce February storm and a fateful turn by a runaway wagon brought the tree to its demise. It was still bearing fruit the summer before, bending with full branches-even when, like everything else in this city, its heart had been born in another place, its roots buried several times over. Peter Stuyvesant’s beloved tree, this goddess of Gotham, had been brought across the ocean and planted in hopes that something of The Netherlands would survive even though New Amsterdam had been lost. Two hundred and twenty years of defiant growth she lasted, from a shady spot on a winding path, to a beloved landmark-now, just a memory. All that’s left to us is a selection of artists’ sketches showing how the apothecary’s storefront was once shaded by her branches-progress and history side by side. – from The Virgin Cure

The apothecary’s shop went on, changing hands many times over the years. Two gentlemen named Engelhardt and Huber took it over from Mr. Brunswick, followed by a young pharmacist named John Kiehl, who eventually bought the business for himself. Today it remains the flagship store for Kiehl’s, a name made famous around the world by Irving Morse and his son, Aaron, and later his granddaughter, Jami.

For me, the connection to this bit of New York City history is a personal one. I imagine my great-great grandmother, Dr. Sadie, would have visited the apothecary shop at Pear Tree Corner countless times while she was in medical school and working at the infirmary. Her father, Alexander P. Fonda would likely have remarked it was only fitting, since his family had been among the first Dutch settlers to come to America. (And, as in the pages of The Virgin Cure, my dear lady doctor eventually met her heart’s match in a kind-hearted apothecary named James.)

Today I’m happy to report, that a pear tree stands at the corner once more. In 2003, a new tree was planted in front of the store at Thirteenth Street and Third Avenue. The occasion is celebrated every November 12th as “Kiehl’s Day.”

I’ve mentioned in my blog and in various interviews this past year the connection between the effects of the myth of the virgin cure in 19th century New York and the devastating toll it’s still taking on the lives of children today in various parts of the world. In Dr. Sadie’s time, the myth surrounded Syphilis, today, it is tied to HIV/AIDS. Part of the ongoing charitable work that Kiehl’s does is to raise funds for AIDS research and awareness. This month, Kiehl’s president, Chris Salgardo and others are joining efforts with amFAR in their “LifeRide,” a nine-day charity motorcycle ride that will end in Washington, DC on the eve of the International AIDS Conference. (I’ll leave a link at the end of the post, and I hope you’ll consider lending them your support.)

People and places mentioned in this post: Learn about The Virgin Cure Past and Present, See part of Stuyvesant’s Original Pear Tree, lend your support to amFAR and Kiehl’s LifeRide.