In 1870, there were over thirty thousand children living on the streets of New York and many more who wandered in and out of cellars and tenements as their familes struggled to scrape together enough income to put food on the table.

Under the mentorship of sister physicians Drs. Elizabeth and Emily Blackwell, my great-great grandmother (Dr. Sarah F. Mackintosh) and her classmates worked tirelessly to care for such children. They faced fierce opposition from the medical establishment as well as from society. Riots formed outside the doors of the infirmary, and funding was difficult to obtain. It was their mission to give health care to all women and children, no matter what their station or income might be. As the population of the city rose at an unprecedented rate, the ravages of disease were felt most keenly on the Lower East Side. Outbreaks of typhoid, diphtheria, and small pox rose alongside the continuous spread of tuberculosis and STDs such as gonorrhea and syphilis. As the “lady doctors” of the infirmary worked to increase awareness of the plight of the city’s poor, the young boys of the tenements were shoved out the door to find work, and little girls became a commodity.

Sold into prostitution at a young age, many girls from poor families were brokered by madams, (or even their own parents) as “fresh maids.” Men paid the highest price for those girls who had been “certified” as virgins.

At this same time in New York, syphilis was an overwhelming, widespread puzzle of a disease and it was this taboo topic that my great-great grandmother chose for the subject of her graduation thesis. In her day, there continued to be much argument over how the disease was spread and there were many unsuccessful (and sometimes destructive) forms of treatment. Worst of all, along with the human wreckage of a disease with no remedy, was an even greater tragedy, a horrible myth that preyed upon young girls.

The myth of “the virgin cure “ (the belief that a man with syphilis could “cleanse his blood” by deflowering a virgin) was without social borders and was acted out in every socio-economic class in some form or another. In fact, the more money a man had, the easier it would have been for him to procure a young girl for this unthinkable act.

As one physician of the time, Dr. James Devon stated, “I have been surprised at discovering the existence of this belief (the virgin cure) in people generally well informed as well as among the comparatively illiterate. I have tried to find evidence for the theory that it is a belief traceable to certain districts but I have discovered it among people of different places and of different occupations – so different that now I should scarcely be surprised to come across it anywhere.” 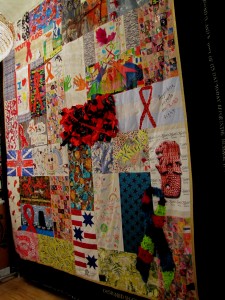 “It is a ghastly, deadly business, this untrammeled oppression of women in so many countries on the planet.” – Stephen Lewis, former Special Envoy to the UN on HIV/AIDS

In my research for writing The Virgin Cure, I found many parallels between the lives of girls on the streets of 19th Century New York and the lives of girls in the developing countries and even the world’s major cities of today. The challenges they face are all too similar – lack of equal rights, lack of education, lack of heath care, lack of employment with fair pay, poor working conditions, as well as the constant threat of sexual abuse and of being sold into a life of prostitution.

My great-great grandmother, (“Dr. Sadie” as her patients called her) and the other women who first practiced medicine at the New York Infirmary for Women and Children were devoted not only to healing the sick, but to bringing the lives of the women and girls they treated into the light of society as a whole. They became a part of the community, establishing trust and friendship along the way. At a time of great social and economic strife, the infirmary became a haven as well as a force for change, bringing health care to all, even if their patients couldn’t afford to pay for it. Sadly, our world is not immune to their struggles.

Today, the United States is in the middle of a health care crisis. The number of people (most notably children) living without health insurance grows every day. Many senior citizens have to choose between buying food to put on their table and paying for their prescription drugs. From a global perspective, more than 10 million people around the world are still waiting for treatment for HIV/AIDS. Not unlike the critical mass the Blackwell sisters were faced with in nineteenth century New York, we have reached a breaking point and things will undoubtedly change, hopefully for the better, in the next decade and into the future.

Much like Dr. Sadie and other doctors of her time longed to find a cure for syphilis – scientists, doctors and researchers today are desperately trying to find a cure for AIDS. Sadly, “the virgin cure” of the 19th century is still being acted out in parts of the world today, (in sub-Saharan Africa, India andThailand, to name but a few places)  with an alarming number of child rapes occurring in the last few years, because of a growing belief in the myth. I feel it is important for us in Western society to remember that the tragedy of the myth of the virgin cure is part of our history as well. In an era when those who are on the front lines of fighting the AIDS crisis are saying the pubic seems to be “burnt out on AIDS,” perhaps a page from our own history will bring us back to the conversation – fostering a sense of global community and the desire to take action.

“The virgin cure myth is thus no mere artefact of an ignorant past, but a very real and present problem. A taboo within a taboo, it is difficult to discuss and more difficult to prevent. Merely entertaining the possibility that some people might believe the virgin cure possible, much less attempt it, is so unpleasant that many people take refuge in denial, or blame it on the ignorant, on the poor, and on parents too incompetent or wicked to protect their children from such a fate. Such claims hold up no better now than they did in the nineteenth century. The virgin cure may, these days, be more a pressing concern in black townships in South Africa than in predominantly white communities in the United States or northern Europe, but this is no excuse for smugness…or false security. As the historical record shows, when desperate situations make it seem reasonable to think about doing desperate things, interest in the virgin cure knows no ethnic or cultural bounds.” From Virgin, The Untouched History by Hanne Blank (Bloomsbury 2007)