I’m reclaiming the word witch. To do so, I’ve got to take things all the way back to its roots…which are, much like the way we regard the word itself—shadowy, misunderstood and not completely clear. Even renowned scholars of etymology can’t quite agree on how it first sprang up, but they all admit its origins are tantalizingly old, stemming from times and places where those labelled with the word witch were revered rather than reviled.

Here are just a few of the earliest meanings to be found in the word’s possible origins:

One who bends (like a willow,) one who dances and makes mysterious gestures, one who rouses others, who wakes the dead, who is strong and lively. A wise one, a teacher, a diviner, a seer, a diverter of evil. One skilled in the use of medicinal herbs. One who sees hidden things. And my personal favourite, “she who knows.”

Which meaning is right? One, some, all? No one knows for sure.

“One thing we do know is that the word came to Britain with the Saxons, who at the time of their arrival on these shores were pagans. I believe that to them, the word witch (or whichever of its forerunners they used), did not necessarily have any derogatory meaning. A witch was a seer, a knower, an averter of evil. The word only took on a negative meaning with the coming of Christianity, which taught that all the gods of the heathen were devils. So anyone who clung to the old ways and the Old Religion was a devil worshipper. And annually, around Halloween, we still see the same old charges being made in the same old spirit of bigotry. Isn’t it sad that these good folk haven’t learnt anything since the Dark Ages?” —Doreen Valiente

Sadly, history has shown us that when that spirit of bigotry is left unchecked, horrible things can happen.

“Women who expressed their religiosity in unapproved ways, or in ways that were “too feminine” by the standards of the culture, were branded as witches or heretics.” – Ayşe Tuzlak (from, “The Real Reason Women Love Witches” by Anne Theriault)

During the witch hunts in Europe and the trials in Salem, mere accusations became death sentences for thousands of people, the majority of them women. (This especially hits home for me, since I recently discovered that I’m related to one of the women hanged for witchcraft at Gallows Hill in Salem. But that’s a story I’ll save for another day.)

Throughout the ages and into the 21st century, the gendered label of witch has been used as a contemptuous slur, thrust upon any woman who was considered “other” in her society —too old, too pretty, too ugly, too smart, too powerful, too wise, too outspoken, too weird, too disabled, too talented, too sexual, too curious, too…well…too just-about-anything-you-can-think-of.

For the past five years while writing The Witches of New York, I’ve been researching the history of witches, mainly as it pertains to North American culture. Recently I started sharing some of that research, via the handle @WitchyWednesday on Twitter. What I haven’t posted are the MANY articles, memes, tweets, posts etc. that I’ve come across where witch is used as a slur against women. Search for the name of any woman who happens to be an influencer in her sphere, any woman of power, strength or unusual talent; then add the word witch to that search, and I guarantee you’ll be met with some to the most vile, hateful and frightening results you’ve ever seen online.

A couple of weeks ago, I watched “She’s Beautiful When She’s Angry,” an extraordinary documentary that traces the history of the women’s feminist movement in the US during the 1960’s and 70’s. Among the leaders of the movement in that era was a group of women that called themselves “W.I.T.C.H” (the Women’s International Terrorist Conspiracy from Hell) also known as (Women Inspired to Tell their Collective History.) The group was formed in 1968 when the NYRW (New York Radical Women) split into two separate organizations—the Redstockings and W.I.T.C.H.

The women of W.I.T.C.H were, “devoted to overthrowing the patriarchal dominance of society, and according to scholar Cynthia Eller, they chose to do so in “witty, flamboyant and theatrical ways” by carrying out witch-themed political stunts. —from Wikipedia

Their glorious manifesto speaks for itself:

WITCH is an all-woman Everything. It’s theater, revolution, magic, terror, joy, garlic flowers, spells. It’s an awareness that witches and gypsies were the original guerrillas and resistance fighters against oppression – particularly the oppression of women – down through the ages. Witches have always been women who dared to be: groovy, courageous, aggressive, intelligent, nonconformist, explorative, curious, independent, sexually liberated, revolutionary.

As a child growing up in Indiana, I watched the film version of the Wizard of Oz annually. (Why they chose to show it at the start of tornado season in the Midwest is beyond me, but that didn’t stop me from planting my bum on the living room floor in front of the TV.) By the age of eight I had most every line memorized, and I’d often find myself thinking about the dialogue from the film long after I’d watched it. Like most kids, I loved the scene where Dorothy lands in Oz and everything turns from black and white to being saturated with wild, vibrant colour. Still, there was one thing about the story that I wished I could change (one tiny thing that would change EVERYTHING that came after.) What if, when Glinda appears and asks Dorothy “are you a good witch, or a bad witch?” Dorothy doesn’t insist she’s not a witch, but instead says “yes!” ? What if, somewhere between wishing she could fly over the rainbow, and getting swept up in the tornado, she becomes a witch? And better yet, what if she KNOWS it? I guess I’ve been itching to write a story about a girl who becomes a witch for most of my life.

Recently, someone asked me to sum up The Witches of New York in one sentence, and this is was my answer: “It’s historical fiction with a twist: part Victorian fairytale, part penny dreadful, part feminist manifesto.” Now as I strive to be a strong, lively woman who sees what’s hidden, who rejects evil, who prides herself in “knowing,” I find myself wondering, “are there any W.I.T.C.H-minded sisters out there today? Where are the feminists ready to reclaim the word, and the power that comes with it?”

As if by magic, my question was answered last week in an amazing article written by Anne Theriault, aptly titled “The Real Reason Women Love Witches.”

She too, it seems, is reclaiming and redefining the word, witch.

“A witch can be any age; a witch does not need to be conventionally attractive; a witch does not wait for prince charming, nor does she reply on anyone but herself.”
“A witch is someone who, when faced with a brick wall, learns to build a tunnel.”
—Anne Theriault

This was the nature of the work of the feminists of the 19th century who fought for abolition, suffrage and labourers’ rights. This was the work of our grandmothers and mothers in the 1960’s and 70’s who fought for equality, civil rights and reproductive rights. This is our work now, to continue the fight…for equality, for LGTBQ rights, for Black Lives Matter, for saving our planet.

There’s a scene in The Witches of New York where a daughter fondly recalls a bit of advice given to her by her mother. It’s advice my mother gave to me long ago—sound advice for all young women, (and witches.)

As a child, Eleanor had watched in awe as her mother had said whatever she thought whenever she wanted to whomever she pleased, mostly to great success.

“When it pains you not to,” her mother had replied.

“All the more reason to speak your mind.” 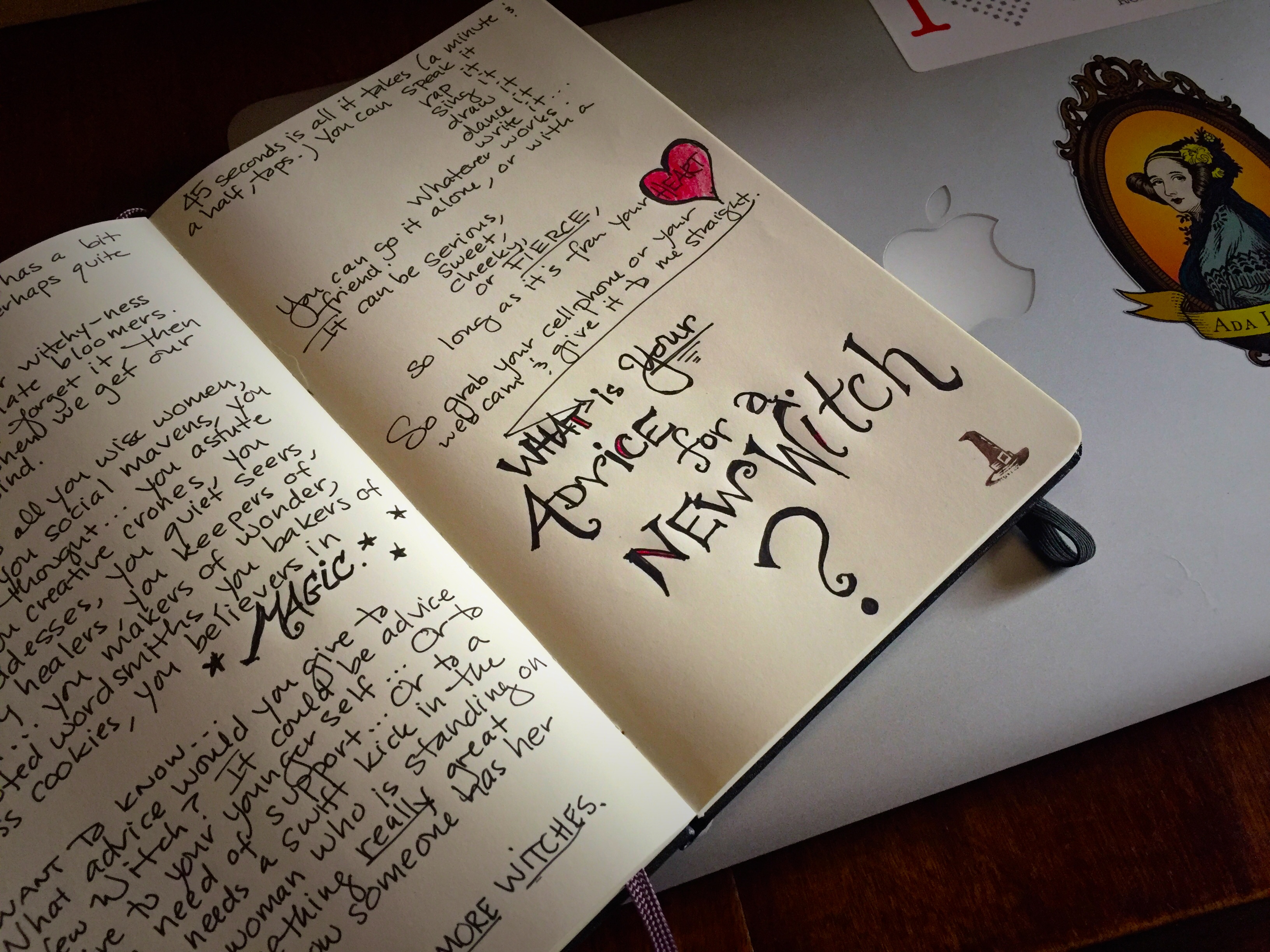